An icosahedral material is a regular three­dimensional array of icosahedra held together by a repeating pattern of flexible interconnecting bands. Each interconnecting band attaches to exactly two icosahedra and each icosahedron has up to 12 bands attached to it, depending on its position within the material. For interior icosahedra with 12 attached bands, this restrains motions in both directions for all three Cartesian coordinate axes. The approach to understanding the motions of an icosahedral material that I will follow in this document is to assume that the icosahedra are rigid bodies and apply Newtonian physics to describe their motions. I will begin by considering the motions of an icosahedron in the material in response to changes in the positions of its attached interconnecting elements and any forces applied to it. Once I have determined the equations that describe these motions, it will then be possible to describe the motions of the entire material by considering interconnected arrays of icosahedra whose individual motions alter the positions of the ends of the interconnecting elements that are attached to their neighbors. The resulting mathematical model will allow investigation of the behaviors of a material in static or dynamic contexts. Solving the equations of the model, which means constructing approximate solutions on a computer, will be easier in the static case but may require significant computational power and skill in both cases.

For the purposes of constructing a tractable mathematical model, I will assume that an icosahedron is a rigid shell of material between two concentric icosahedral surfaces with constant density ρ and uniform thickness T, as measured, for example, at the center of a face. So I am ignoring any additional structure in the interiors of the icosahedra, either assuming that any such structures have too little mass to be important or that the mass of any interior bracing is also icosahedrally distributed.

In general, an icosahedron within an icosahedral material may experience the following forces:

Surface forces include externally applied forces and possibly forces generated when icosahedra collide. If the faces of the icosahedra are frictionless, then only the components of surface forces on the exteriors of icosahedra that are normal to the faces will influence the icosahedra. If, however, the faces exhibit friction, then tangential components will also have effects. The last two forces will usually change over time. The force of gravity will be assumed to remain constant and may or may not be important in a given situation.

(This isn’t quite right. The force that an interconnecting element exerts also acts to restore its angles of attachment and a particular orientation of the icosahedra it connects relative to each other. It doesn’t just act to restore the length of the element. This effect depends on whether a portion of either icosahedron lies between the connection points.) It might also be useful to allow the interconnecting elements to have different stiffnesses depending on whether they are stretched beyond their natural length or compressed shorter than their natural length. In this case,

Furthermore, it’s possible to specify that the interconnecting element breaks if stretched
too far. In this situation,

where Le>D is the length at which the interconnecting element breaks under extension and tb is the time of breakage. This description neglects any change in the properties of the element that might occur near the breaking point and neglects any recoil that might occur afterwards. An analogous condition may be imposed if the element breaks when compressed too far. Notice that, under the above description and consistent with Newton’s third law, the force that a connection exerts on the second icosahedron is simply the opposite of the force that it exerts on the first icosahedron.

Equations of Motion for a Rigid Body

which states that the force F is the rate of change of the (linear) momentum p, and its rotational counterpart

which states that the torque N is the rate of change of the angular momentum L. Here m is the mass of the body and a is its acceleration. Any quantities written in a bold font or, alternatively, with arrows over them are vector quantities.

In analyzing the motions of a body, it’s worthwhile to consider three different coordinate systems, as shown in Figure 1. In this discussion, I will adopt the notation of Fetter and Walecka. (For information related to the following analysis, see Fetter and Walecka pp. 134­9 and pp. 31­9; Fowles pp.117­22 and Chapters 7 and 8; and Bourg Chapters 1, 14, and 15.)

The other two coordinate systems are associated with the body itself and are used to simplify the analysis. The first of these is a coordinate system that has the same unit basis vectors as the primary frame with its origin located at the center of mass of the
body. I will call this frame the center­of­mass frame. Its coordinates will be

The third coordinate system is a right­handed Cartesian coordinate system with its origin
at the center of mass of the body that is attached to the body and fixed so that it moves as
the body moves. I will call this frame the body frame and define

to be its coordinates and

to be the corresponding unit basis vectors, where again i=1, 2,3. The position r of an arbitrary point in the body as seen from the primary frame may be written as

The center of mass moves like a point mass, having the mass M of the entire body, that experiences the net force Ftotal applied to the body. Therefore, the position of the center of mass R satisfies Newton’s second law

where L‘ is the angular momentum of the body about the center of mass. The rotational analog of Newton’s second law allows us to calculate how L‘ changes in response to the applied forces. It implies that

where Ntotal is the net torque. The angular momentum L’ may be expressed in terms of the moment of inertia tensor I and the angular velocity

so that Equation (9) may be rewritten as

This equation determines the angular velocity of the body

as a function of time. The components of the moment of inertia tensor are constant in any particular body frame and are given by

is the density of the body,

is the Kronecker delta, and the integration ranges over all points P in the body, where

are the components of P in the chosen body frame. (See Feynman, Leighton, and Sands V. II, pp. 31­6 to 31­8; Fetter and Walecka pp. 134­7; and Fowles pp. 217­9.) Notice that the moment of inertia tensor is symmetric, which means that its determination only requires the evaluation of 6 of these integrals rather than all 9.

Given specified primary and body frames, Equations (7) and (9) provide the equations of motion for the body

where r=R+r‘ . These equations are usually coupled since the force usually depends on the position of the body. Aside from these equations, it is also necessary to specify the initial conditions

0 are constant vectors, as well as the forces

and completely determine the motions of the body.

is best solved in the body frame. Therefore, it is important to be able to express the angular velocity in the centerof­mass frame and the torques in the body frame. Translating back and forth between the primary and center­of­mass coordinate systems is a straightforward matter of adding or subtracting R to or from the position. But the transformation between the body and center­of­mass coordinates is complicated and time­dependent, and it is necessary to solve an additional system of differential equations to determine it.

To find this coordinate transformation, consider the unit basis vectors for the body frame

. These vectors may be expressed in the center­of­mass frame as

are the components of the angular velocity

in the body frame, then the angularvelocity in the center­of­mass frame is

for all i. This equation provides 9 differential equations that determine the coefficients

Since these equations contain the angular velocity, they are coupled with the equations of motion and must be solved simultaneously with the previous equations. This approach requires solving 15 scalar differential equations to determine the motions of a rigid body and, in particular, of each icosahedron.

Rather than using the coefficients

to specify the rotation of the body coordinate system, it is possible to describe rotations using mathematical entities called quaternions, which can be thought of as a generalization of complex numbers. (See Kuipers, Bourg pp. 227­9, Behnke et al pp. 467­77, Penrose pp. 198­208, and the Wikipedia (1,2,3) and Wolfram MathWorld entries pertaining to quaternions.) A rotation of angle

In the center of mass coordinate frame, the quaternion that represents the rotation of the

where the angular velocity is written as the “pure” quaternion

In the body frame, q satisfies the equation

is written in the body frame instead. The equations are different since quaternions do not commute under multiplication. The solution to either equation must satisfy the initial condition

where q0 is a constant quaternion expressed in the appropriate coordinate system. If a point with initial position r ‘0 in the body has been rotated according to a quaternion q, then its new position is

where q* is the conjugate

in this coordinate system, where

is the golden ratio =

To read the full Report…

You can find the full model analysis & engineering report, in the Mathematical Model of Icosahedral Materials pdf here >>> 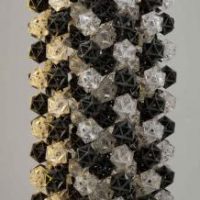 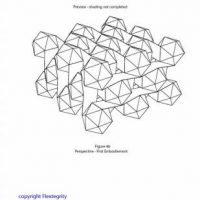 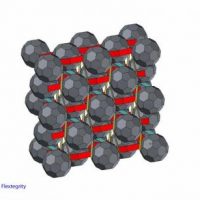 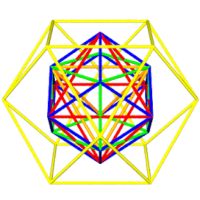 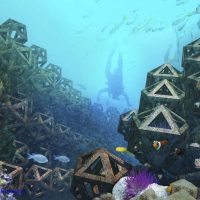